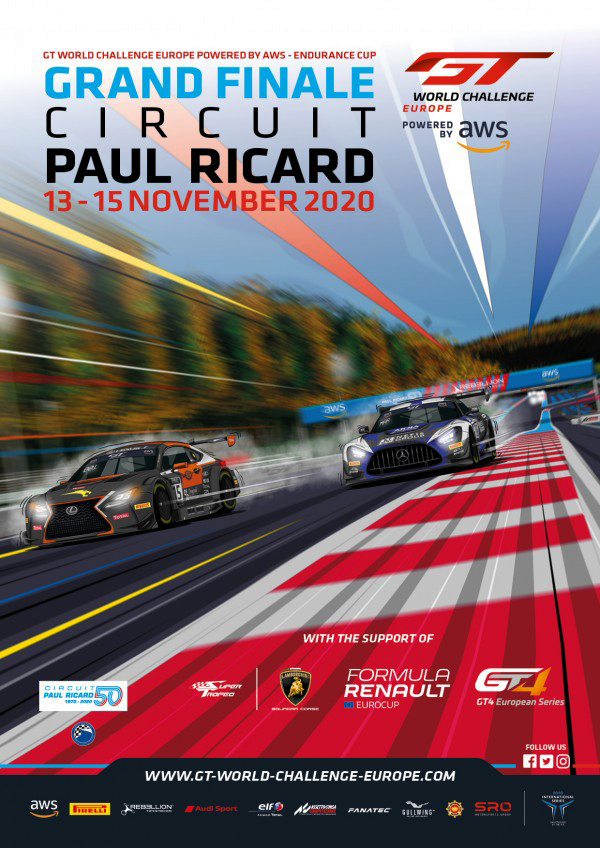 Overall and class titles up for grabs at season-deciding event

The sun will set on the 2020 GT World Challenge Europe Powered by AWS campaign next weekend (13-15 November) when a 40-car field tackles the season-deciding Endurance Cup contest at Circuit Paul Ricard.

Originally scheduled for 28-29 May, the long-running event retains its 1000km format to wrap up an ultra-competitive championship that remains too close to call. What’s more, it will represent the 50th Endurance Cup race staged since the series was launched at Monza in 2011.

Events in the Ardennes often wrap up a number of titles with a round to spare, but that is not the case in 2020. Indeed, only the GT World Challenge Europe Powered by AWS Pro-Am champions were decided, leaving significant silverware to be distributed at the finale.

As such there will be Endurance Cup titles for teams and drivers up grabs in the overall classification, as well as in the Silver Cup, Pro-Am and Am Cup classes. In the combined GT World Challenge Europe Powered by AWS standings, both the overall and Silver Cup titles remain on the line in.

With several line-up changes making the competitive order more difficult than usual to predict, a thrilling season finale is in prospect as the Endurance Cup celebrates its half century.

The overall Endurance Cup drivers’ championship remains wide open ahead of the trip to France, with two leading crews tied on 52 points and several others close behind.

Having taken victory at the Nürburgring and a podium at the Total 24 Hours of Spa, the #54 Dinamic Motorsport Porsche squad of Christian Engelhart, Sven Müller and Matteo Cairoli holds a marginal advantage over Raffaele Marciello and Timur Boguslavskiy, who are joined in the #88 AKKA ASP Mercedes-AMG by former series champion Maxi Buhk.

There are also several outside bets, with drivers representing HRT Mercedes-AMG and Audi squads Attempto Racing, Belgian Audi Club Team WRT and Sainteloc Racing all mathematically capable of taking the title. In each case, victory in France will be essential.

The picture is similar in the teams’ standings. The Dinamic squad leads with 55 points, three clear of AKKA ASP, while Ferrari outfit SMP Racing has taken 46 points through its AF Corse entry. A further six teams remain within a race victory of snatching the title.

The battle for the overall GT World Challenge Europe Powered by AWS drivers’ crown is less complicated. With 137 points to his name, Timur Boguslavskiy holds a 24-point advantage over Charles Weerts and Dries Vanthoor, meaning the #88 Mercedes-AMG driver needs only a fifth-place finish to guarantee the title. Kelvin van der Linde also retains an outside shot on 106 points but will need a perfect weekend and for Boguslavskiy to finish no better than ninth.

The combined teams’ title will disputed by two of the series’ elite squads, with Belgium Audi Club Team WRT just four points clear of AKKA ASP ahead of the finale. Both have taken the big prize before, making this a true heavyweight showdown.

A total of 18 full-pro crews will compete at the finale, while a number of squads have shuffled their line-ups due to a particularly congested weekend for global GT racing. They include the title-chasing #51 AF Corse Ferrari, which will feature the experienced duo of Côme Ledogar and Sam Bird alongside Pier Guidi. This adds further intrigue to what promises to be a fiercely contested battle for championship glory.

Class titles on the line in Silver Cup, Pro-Am and Am Cup

In the Silver Cup, the battle for the Endurance title is by no means settled, though a 17-point advantage gives the Barwell Motorsport crew of Frederik Schandorff, Alex MacDowall and Patrick Kujala breathing space ahead of the finale. After winning at Imola and showing strongly at the Total 24 Hours of Spa, the #78 Lamborghini is expected to be a front-runner once again.

Of course, nothing is guaranteed. Having clinched class honours in the Ardennes, Hubert Haupt and Sergey Afanasiev (#5 HRT Mercedes-AMG) will be targeting maximum points at Circuit Paul Ricard as they seek to overhaul the 17-point deficit. The HRT drivers are level with Valentin Hasse-Clot and Andrew Watson (Garage 59 Aston Martin), while Baptise Moulin (Orange1 FFF Lamborghini) and Ezequiel Perez Companc (Madpanda Motorsport Mercedes-AMG) each retain a long shot at the title.

The teams’ standings tell a similar story. Barwell leads the way on 77 points, followed by Garage 59 (59 points) and HRT (58 points). Orange1 FFF Racing and Madpanda Motorsport are outside bets, with both on 47 points.

The Madpanda squad has a far better outlook in the GT World Challenge Europe Powered by AWS Silver Cup title hunt, where Perez Companc has amassed 111.5 points in the drivers’ standings. His closest challenger competing at Circuit Paul Ricard will be Benjamin Hites (#89 AKKA ASP Mercedes-AMG), who trails by 29 points with 34 left to score. In the teams’ championship, Madpanda is 26.5 clear of Belgian Audi Club Team WRT, with AKKA ASP a further two points in arrears. A field of 11 Silver Cup cars will compete for class honours, with no major changes to the entry list.

The only matters settled ahead of the finale are the GT World Challenge Europe Powered by AWS Pro-Am titles. A runner-up finish for the #93 Ferrari at the Total 24 Hours of Spa was enough to clinch the teams’ championship for Sky Tempesta Racing, while full-season competitors Chris Froggatt and Eddie Cheever III picked up the drivers’ crown. The same combination also collected the Sprint Cup title earlier in the year.

With Endurance Cup teammate Jonathan Hui joining them at Circuit Paul Ricard, they will be hoping to complete a 2020 title hat-trick. But this is a very close-fought contest, with the Tempesta trio tied on 59 points with Alex West and Chris Goodwin (Garage 59 Aston Martin). Barwell Motorsport is in the hunt as well, with Spa winners Leo Machitski, Rob Collard and Sandy Mitchell just seven back from the Tempesta crew.

These three squads lead the way in the teams’ standings having amassed the same points as their drivers. In both championships there are a number of outside bets, with Ferrari outfits AF Corse and Rinaldi Racing, Orange1 FFF Racing with its Lamborghini and the Boutsen Ginion Racing BMW all retaining a shot at the title.

There will be 10 Pro-Am cars on the grid at Circuit Paul Ricard, including a one-off entry from Rinaldi Racing for Christian Hook, Manuel Lauck and David Perel. At Garage 59, Marvin Kirchhöfer will join the squad’s title push in place of Jonny Adam. Sainteloc Racing will add the final car to the field, competing for Am Cup honours with the #26 Audi.

As well as the main attraction, the weekend will also feature support action from the GT4 European Series, Formula Renault Eurocup, Lamborghini Super Trofeo and FFSA French F4 Championship. All four will stage their season-ending races at Circuit Paul Ricard, with the GT4 contenders set to decide the outcome of their championship after dark on Saturday evening.

The GT World Challenge Europe Powered by AWS weekend will begin with Friday’s bronze test, a one-hour session that gets underway at 18.30. The full field will be out bright and early on Saturday morning, with a 90-minute free practice run going green at 08.00.

Pre-qualifying follows at 13.50, giving competitors a further 90 minutes of track-time. Then, at 17.15, the final qualifying session of the season will get underway, setting the grid for Sunday’s race. With several close-fought championship battles, the point on offer for pole in each class could prove crucial.

That just leaves the main event. Racing will get underway at 11.45 and run for 1,000km or a maximum of six hours, with the chequered flag set to fall at around 17.45. Just as the sun sets over Circuit Paul Ricard, so it will set on the 2020 season.